Continuing my series on improving your performance through inspiration from drag queens. So far we've looked at make up, and we've looked at how to hold your nerve in the face of adversity. So let's move on.

Committing to the process

On Ru Paul's Drag Race, contestants are often given challenges involving acting, singing, modelling etc, and one of the most commonly repeated pieces of advice, from judges, coaches and Ru is "don't hold back, we'll let you know if you need to rein it in".

I can only recall one instance, in 6 seasons, where a queen was asked to tone down her performance. I have a theory that if you have enough self-awareness to realise that holding it back might be an option, you probably don't need to. In every other case on the show where a performer has gone all out and given everything she's got, the result has been outstanding.

I realised in a dance class this week, that holding back isn't just a performance issue. Sometimes, when I am learning something new, I am reluctant to go all out, and truly commit to every movement and every zill clap. Fear of making a mistake can make us hold back, and holding back means not getting the most out of a learning opportunity.

Missing the mark sometimes is OK, it's part of the process. If you are throwing yourself into your learning and getting the most out of it. Your eventual success will be the product of multiple mistakes, it's better to get it wrong and have something to improve upon, than to sit on the sidelines or give the kind of halfhearted effort that results in something so non-committal that it's hard to tell what it is, let alone how to make it better. I don't expect my students to turn up to class already polished and perfect on today's material, I'm learning not to expect that of myself either.

Often people who don't understand are quick to criticise or revel in the apparent "failures" of others. We have already established that this is none of our business. If they aren't making any mistakes, then they clearly aren't pushing their own boundaries, and if they are, then pointing out yours while ignoring their own is hardly something to be proud of.

Being "larger than life" is a stage essential.

When we perform we have to project our message out to the audience. Just like how public speaking is a very different animal to having a conversation with a friend, projecting your personality and telling your story in a dance performance, requires a little amplification.

In the make up installment, I talked about "beating for the back row" because distance and strong lighting can wash out your make up and erase your features. In much the same way, a stage setting can "wash out" your performance, so don't be afraid to make it that little bit stronger. Subtle nuances and gentle emotions are an important part of Raqs Sharqui, but the beauty of your performance can be lost or diluted. Don't be afraid to emote that little bigger, or to save your most subtle performances for your most intimate venues.

Who are you when you are on the stage?

Some drag queens have a completely different personality for stage, a whole character who may have certain things in common with the performer, but is, in their mind, a completely different individual. If you like, you can do this in dance too, it's certainly the case for certain character pieces where the dancer is effectively telling someone else's story, or acting as a particular stereotype (such as in a Melaya Leff).

Other queens simply amplify (often with a good deal of distortion) their own personality. They become bigger, louder, snarkier perhaps, but they are effectively still themselves. Often, in fact, they are more themselves in drag than they are out of drag, where the costume and performance settings allows them to say and do things without facing the same judgement or consequences that they might if they did the same off-stage. Michelle Visage once commented that Bianca Del Rio's greatest talent, was that she had people lining up begging her to insult them, I can guarantee that her alter ego, Roy, would not get away with saying those same things in an everyday setting!

For any performer, a solid stage persona can act like an armour, giving us the confidence to put ourselves out there and "speak our truth". Don't be afraid to be fabulous, don't be afraid to be proud of the work you have done to get yourself up there. This is your spotlight, take it fearlessly. 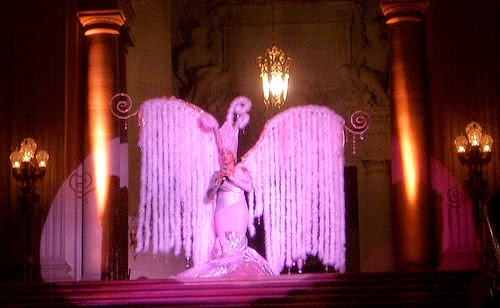